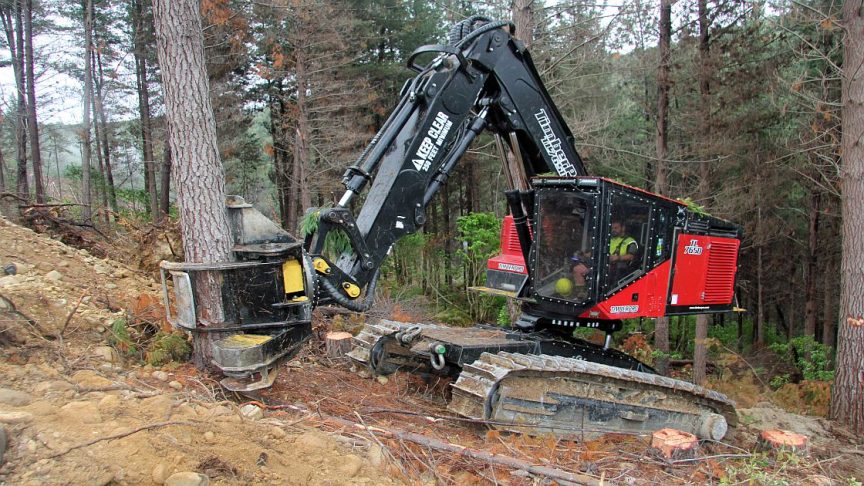 On December 19, 2013 a 20-year-old Levin man, Lincoln Kidd, was crushed to death by a falling tree – the 10th forestry worker in New Zealand to die in a single year; the 27th in four years. Forestry was setting the wrong sort of records. There were so many deaths, the industry had its own dedicated coroner.

Enough was enough. As the media waded in and the unions launched high-profile campaigns, the Government finally called for an inquiry. The industry’s legitimacy, its social licence to operate, was on the line. Companies needed to dramatically improve their safety record.

The way to do it was to get people off the ground. Everyone knew having workers in big machines with reinforced cabs kept them much safer than having them cutting down trees with chainsaws and, even more dangerous, hooking up cut tree trunks so they could be hauled up often steep slopes.

Mechanisation and automation suddenly stopped being nice-to-have, they became must-have, particularly for bigger forestry companies. From 2013 to 2021, the forestry industry went from under 25 percent of production being mechanised to over 65 percent, says Professor Rien Visser from Canterbury University’s School of Forestry, the country’s leading expert in forest engineering.

Whereas a decade ago the average logging operation involved all or the majority of the felling and hooking-up work being done manually, these days the typical forestry crew, at least in big forests, has everyone in a machine. The death toll has started to fall – over each of the past two years three people died. Too many, but better than 10.

But something else happened too: productivity in the forestry sector has gone through the roof. These days, most crews are harvesting on average 300 tonnes a day, Visser says. A decade ago, 150 tonnes was “a big target”.

Meanwhile, the industry has been able to handle a major expansion, from 20 million cubic metres of wood a year in the early 2010s to 35 million now. And the industry has done that with about the same number of workers, an important factor given increasing labour shortages.

It’s been a slow, painful and very expensive transition. Some of these big machines cost $1-2 million each, a massive outlay for smaller contracting companies that often do the bulk of the work. Some companies went under.

In some hideous way, that unacceptable death toll in 2013 was a tipping point. It forced New Zealand’s forestry companies to do what they should have done anyway, but may not have because of the cost and the risk, because of inertia or union concern about job losses or worries about having to train people to use the new machines.

It forced them to innovate and automate. The initial move to automation and mechanisation was very challenging, Visser says. “Contractors’ cost structures were much higher, and there was huge pressure to be productive all the time.

“But once you have established a level of automation, no contractor would go back.”