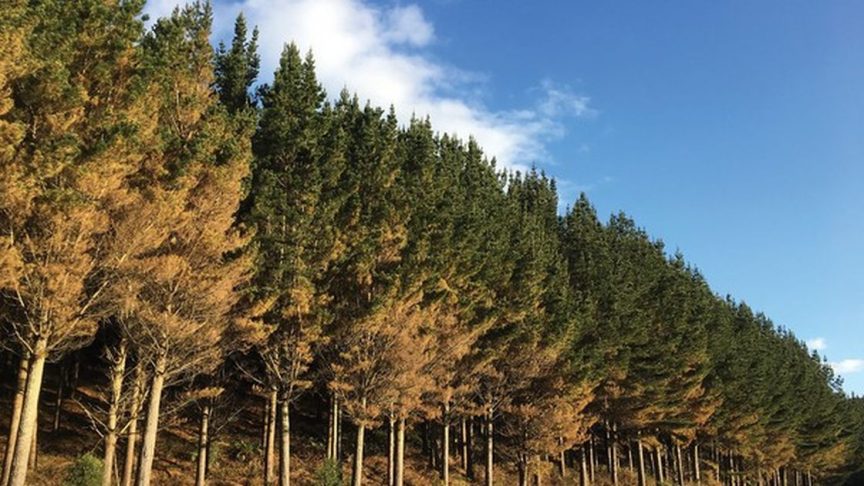 From a forest biosecurity perspective, there is growing interest in forest surveillance processes capable of providing information on foliar disease present within the planted estate. Monitoring strategies often rely on aerial surveys to provide this information; they are, however, infrequent and only cover a small proportion of the forest estate.

In this article, we present the results of a collaborative project between Scion and Indufor that aimed to develop a monitoring framework capable of detecting Red Needle Cast (RNC) from remotely sensed imagery. In the past, sporadic outbreaks of RNC (caused by a fungal-like organism, Phytophthora pluvialis) have significantly impacted the growth rates of radiata pine, particularly within the North Island of New Zealand.

First detected in 2008, the pathogen quickly spread through the forest estate. In a bad season and at its peak, it can reduce tree growth by up to 40%. The disease causes a gradual browning of the lower needles and progressively works its way into the upper canopy. Needles are usually dropped entirely by Spring.

Evidence suggests that tree mortality is rare, with needles reappearing within three months of infection. Existing forest surveillance include aerial survey and field reports; however, the randomness, severity and scale of outbreaks can make quantification and detection challenging, especially in remote areas.

Against this backdrop, the project team developed a methodology that uses repeat-visit Sentinel satellite data to systematically monitor broad areas. Initial testing took place within the East Coast region, where there was available expression data to train a model.

Over several months multiple Sentinel-2 images captured the gradual expression of the disease as it progressively moved into the upper canopy. Its impact was quantified using a classification approach that leverages repeat satellite observation with results checked against expression areas mapped from high-resolution images.

“The initial results are very promising and will only improve with more observations of the disease,” says Grant Pearse, who leads Scion’s Geomatics team. To encourage further discussions with industry the team developed a prototype application that allows users to view the results of the RNC detection model.