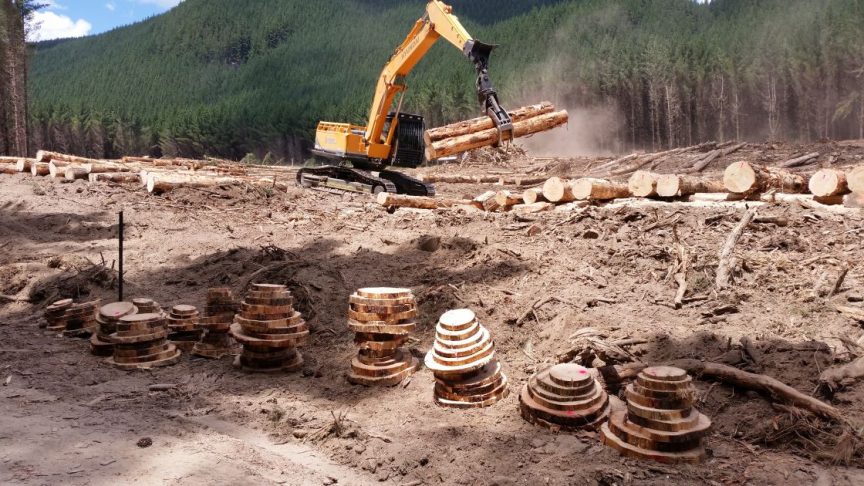 Forest owners and managers can increase log quality, yield and total value by up to $16,000 per hectare by choosing the right tree spacing and best genetically improved tree stocks for their forest stands.

A team of Scion scientists in New Zealand have carried out end-of-rotation assessments at Atiamuri near Rotorua (planted in 1990) and Glengarry near Napier (planted in 1987) (Moore et al, 2017). These sites are part of the long-running silviculture-breeds trial series, which covers 28 sites across New Zealand.

Plots within each trial were planted at different initial stand densities, thinned to final stand densities of between 100 and 600 stems per hectare, and included material from seedlots with growth and form (GF) ratings ranging from GF7 to GF25. Pre-harvest assessments were made on diameter at breast height, tree height, branching patterns and stem straightness on standing trees. Wood density and stiffness were also measured.

The researchers modelled the log grades likely to be obtained from each stem in a plot to estimate the total volume of recoverable wood (TRV), and its value. They found that both increasing final stand density and increasing genetic improvement significantly increased TRV and total value, as well as significantly decreasing the number of branches greater than 7 cm in diameter.

The final stand density of 600 stems per hectare found to give the greatest TRV and value is very close to the density recently predicted to maximise value (Watt et al, 2016). At this stand density, which is higher than is typically found in many planted forests in New Zealand, a site is fully occupied but not overcrowded. The higher stocking rate also suppressed the formation of larger branches.

To look at the effect of seedlot, the GF Plus ratings for (diameter) growth, straightness and branching were estimated for each seedlot. GF Plus diameter ratings were shown to be positively related to total standing volume, while GF Plus ratings for branching and straightness also affected total value as a higher proportion of wood volume was in more valuable log grades.

No interactions between final stand density and seedlot were seen for any of the parameters measured in this work. However, as other experimental plots in the trial series reach maturity over the next five years, the additional data will enable the development of a more detailed understanding of the relationships between silviculture, genetics and wood quality.

Data from this work will help forest owners and managers better able to account for the impact of genetic improvement and density on total value in modelling software such as Forecaster. Optimising stand density and using improved seedlots presents a real opportunity to grow not just more wood, but more usable, higher quality wood, increasing the productivity of planted radiata pine forests in New Zealand.

Photo. Detailed data collection at the Atiamuri site part of a nationwide trial series investigating the effect of silviculture and genetics on wood properties and economic value. The full paper is available here

Wildfire meteorology: Drones proving their worth