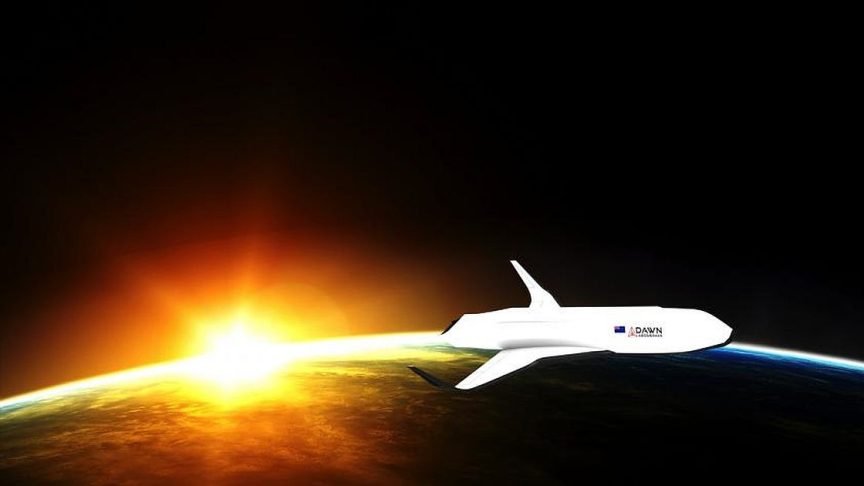 A New Zealand-based aerospace company is on the path to revolutionising space transportation.

Dawn Aerospace, headquartered in Christchurch, New Zealand, has unveiled its suborbital spaceplane, the “Mk-II Aurora”, ahead of an intensive 12 month flight test campaign.

The Mk-II Aurora is the latest development in a series of test vehicles that will one day launch satellites into space. It is the second rocket-powered aircraft or “spaceplane” produced by Dawn Aerospace. It will be capable of flights to above 100km altitude, the border to space, before returning to land at an airport. Upon landing it can be refuelled and flown again within hours. It will be the first vehicle to ever be capable of such a feat multiple times per day.

“The Aurora represents a massive step forward in space transportation,” said Stefan Powell, Chief Technology Officer of Dawn Aerospace. “Using the same vehicle hundreds or even thousands of times means we don’t need a factory to produce rockets. We can operate a fleet of vehicles to access space daily. And we don’t have to pollute the ocean with rocket debris as we do it.”

The Mk-II Aurora will demonstrate the core technology for daily access to space in a subscale vehicle. It has a modest payload capacity, enough to bring scientific experiments to space, but too little for an orbital second stage. The later generation Mk-III will be based on the Mk-II design, but with a larger payload capacity. This will allow a 50-100kg satellite to be delivered to orbit.

The Mk-III will deliver satellites into orbit using an expendable second stage. After releasing a satellite, the second stage burns up in the atmosphere and accounts for about 6 percent of the whole vehicle, making the whole system 94% reusable.

Current rockets have to fly out of special launch sites and secure, exclusive airspace. This means they have to shut down busy travel routes, such as around Cape Canaveral in Florida, or travel to far-flung places where air and sea traffic is low. Dawn Aerospace will fly its spaceplanes from existing airports under aircraft laws. They are working closely with the NZ Space Agency (NZSA) and Civil Aviation Authority (CAA) to make that happen.

“The challenge of getting to space is equal parts the vehicle, the launch infrastructure and the regulation,” said James Powell, General Manager and CFO. “Building a cheaper rocket, as many are trying to do, only helps with the first part. Dawn’s spaceplane addresses all three factors. The CAA and NZSA have established the best regulatory system in the world, which makes this possible. We are privileged to be working with them.”

Dawn signed an MOU with Waitaki District Council earlier this year for suborbital flights out of Oamaru Airport. The company is also in talks with other airports around New Zealand.

Dawn Aerospace acquired seed funding of NZ$3.3million in December 2018, as well as funding for the project through Callaghan Innovation. They were awarded a grant of NZ$500,000 from NZSA for development of non-toxic satellite propulsion. The company also has a major facility in Delft, The Netherlands. Test flights of the Aurora will start in late 2020.

Although primarily a technology demonstrator for the Mk-III, the Aurora will also be extraordinarily useful for scientific research. It will be capable of accessing parts of the atmosphere too high for regular aircraft or balloons, but too low for satellites.