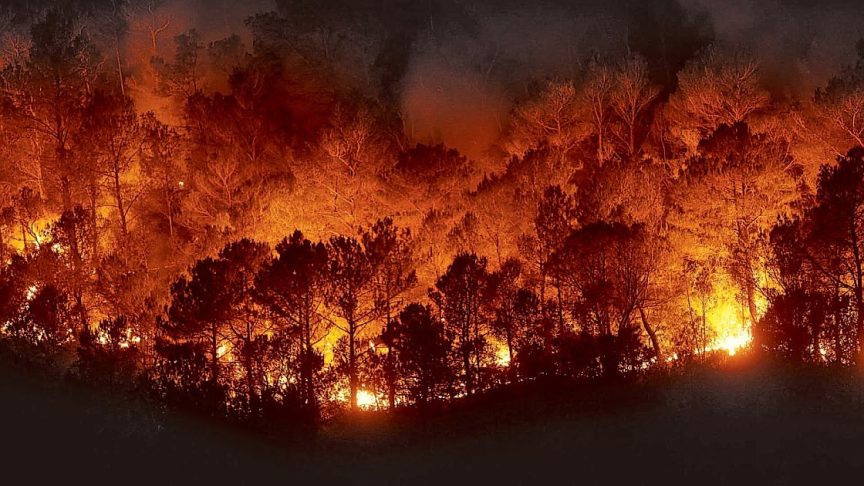 The California Air National Guard‘s 195th Airlift Wing recently launched a drone reconnaissance mission to aid firefighting efforts in northern California. At least six people have been killed by the raging wildfires with more than 500 homes and buildings decimated. The unit deploys a MQ-9 Reaper drone to monitor and track the blaze. The drone flights collect data, imagery and telemetry which is transmitted to state firefighting officials.

“We’re able to provide real-time eyes on in any area where the fire’s at,” said Air Force Maj. Nicholas Edwards, intelligence analyst manager. “We can provide information to where CAL FIRE can direct resources. We give information to the decision makers in a timely manner.”

The Guard’s contributions are “seriously helping us,” said Capt. Robert DeCamp, CAL FIRE intelligence officer. “The knowledge they have and the information they provide are critical for us to fight the fire. They have equipment we don’t have, and that helps us tremendously.” Drone data helps track the fire’s movements, so authorities can position defences and notify the public if evacuations are necessary.

“This is one fire that’s very unpredictable, but we can track it with the capabilities the Guard provides us,” DeCamp said. Over the past few years, drones have been embraced by both firefighting agencies and by officials seeking to mitigate wildfire damage. In March, New Hampshire-based Birdseyeview Aerobotics won a federal contract to provide 50 vertical-take-off-and-landing, fixed-wing drones to the U.S. Interior Department, an agency that oversees millions of acres of public land and administers several monuments.

In 2016, Canadian drone company Aeromao partnered with the U.S. government to survey and map fire-damaged land. Using the $9,000 Talon – equipped with a Micasense Rededge multispectral imagery array – researchers are able to map acreage and survey damage to foliage. That data can then be used to re-introduce wildlife and domestic mammals to viable land after the fires.