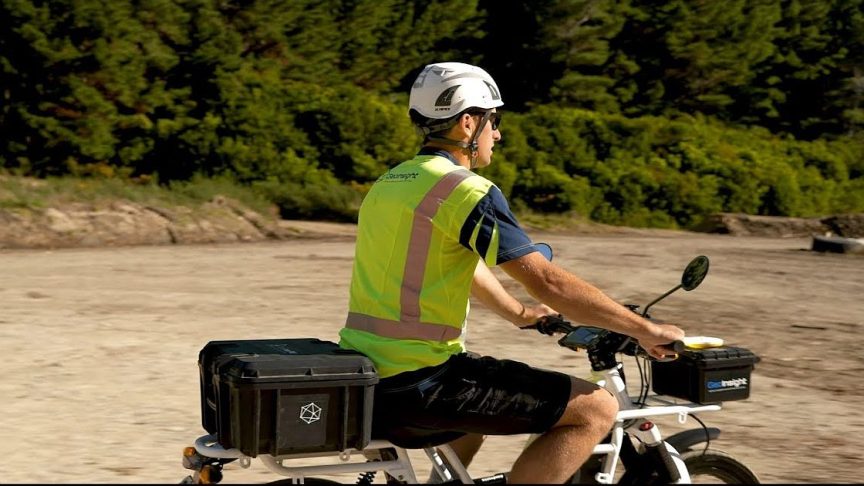 A drone “mosaic” of harvested forestry blocks is letting Marlburians see the wood for the trees, and could cut down environmental issues. In New Zealand, Marlborough company GeoInsight Limited is using drones, 360-degree cameras and an e-bike to “stitch together” images of forestry blocks and help the Marlborough District Council streamline compliance checks.

Of the council’s 17 monitoring programmes, forestry is ranked the highest, due to its potential for adverse environmental impacts like land instability, erosion, and driving out native plants and animals.

GeoInsight co-founder Mark Spencer said the same issues cropped up “time and time again” during his decade-long stint as an environment officer at the council, so he teamed up with fellow co-founder and former council business analysis Rob Besaans to create ‘RemoteHQ’.

The pair had spent three years developing the software while on independent compliance checks for the council, designing it to be used in the six years post-harvest, when blocks were vulnerable to weather. “What typically happens is a company comes in, takes all the trees off [a block] and says, ‘see you later landowner. Good luck with that’.

“The block will sit idle during that ‘window of vulnerability’ period and landowners just really hope that no big weather events come through. If there is, a lot of the time … they tend not to do a lot of maintenance. “It’s important that pressure is put on either the landowner or the company to maintain what they put in place, otherwise we get erosion.”

The software would help make compliance “proactive, rather than reactive”, he said. The pair would send up a drone to photograph the forestry block, with images “stitched together” to create a high-definition mosaic. Shots were also taken on foot. An e-bike was used to get around forestry blocks and move equipment.

Spencer said the technology allowed compliance officers to spot issues that weren’t visible on foot. He recalled a drone spotting “cracks” on a hillside, which could have triggered a compliance failure if wet weather had dumped forestry materials into the stream below.

After identifying spots that were a compliance failure, concern or excellent, the pair broadcast the results online on the RemoteHQ website for the council, public and other forestry members to see. A council compliance officer could then use the software to point out problems to forest managers and landowners, with the aim of stopping environmental issues before they occurred.

GeoInsight’s fees were paid by landowners, not ratepayers, Spencer said. The pair were developing the software from their own pocket. Besaans described the software as a “radically new approach” to environmental management, one underpinned by public transparency.

“We set up GeoInsight … to eliminate erosion and sedimentation across New Zealand, starting with the Marlborough region,” he said. The pair’s long-term goal was to see RemoteHQ used by other regional councils.