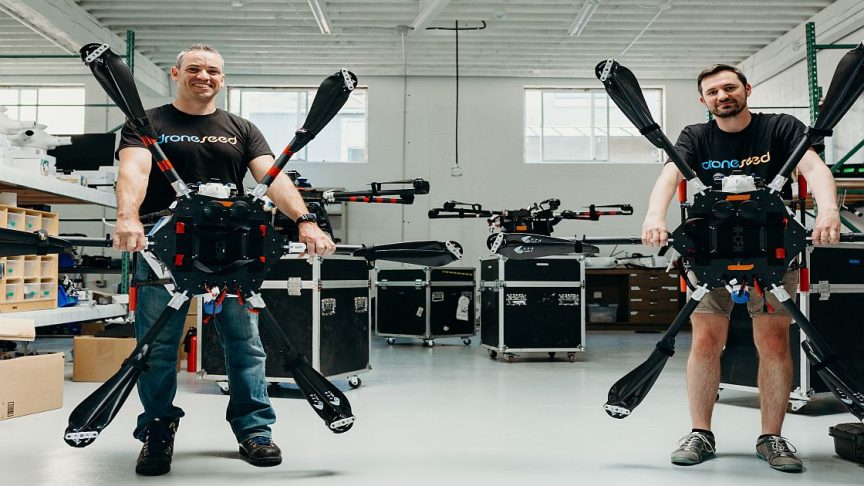 Wildfires are consuming North American forests and grasslands faster than we can replace them. It’s a vicious cycle of destruction and inadequate restoration rooted, so to speak, in decades of neglect of the institutions and technologies needed to keep these environments healthy.

DroneSeed is a Seattle-based start-up that aims to combat this growing problem with a modern toolkit that scales: drones, artificial intelligence and biological engineering. And it’s even more complicated than it sounds.

A bit of background first. The problem of disappearing forests is a complex one, but it boils down to a few major factors: climate change, outdated methods and shrinking budgets (and as you can imagine, all three are related).

Forest fires are a natural occurrence, of course. And they’re necessary, as you’ve likely read, to sort of clear the deck for new growth to take hold. But climate change, monoculture growth, population increases, lack of control burns and other factors have led to these events taking place not just more often, but more extensively and to more permanent effect.

On average, the U.S. is losing 7 million acres a year. That’s not easy to replace to begin with — and as budgets for the likes of national and state forest upkeep have shrunk continually over the last half century, there have been fewer and fewer resources with which to combat this trend.

The most effective and common reforestation technique for a recently burned woodland is human planters carrying sacks of seedlings and manually selecting and placing them across miles of landscapes. This back-breaking work is rarely done by anyone for more than a year or two, so labour is scarce and turnover is intense.

Even if the labour was available on tap, the trees might not be. Seedlings take time to grow in nurseries and a major wildfire might necessitate the purchase and planting of millions of new trees. It’s impossible for nurseries to anticipate this demand, and the risk associated with growing such numbers on speculation is more than many can afford. One missed guess could put the whole operation underwater.

Meanwhile, if nothing gets planted, invasive weeds move in with a vengeance, claiming huge areas that were once old growth forests. Lacking the labour and tree inventory to stem this possibility, forest keepers resort to a stopgap measure: use helicopters to drench the area in herbicides to kill weeds, then saturate it with fast-growing cheatgrass or the like. (The alternative to spraying is, again, the manual approach: machetes.)

At least then, in a year, instead of a weedy wasteland, you have a grassy monoculture — not a forest, but it’ll do until the forest gets here.

One final complication: helicopter spraying is a horrendously dangerous profession. These pilots are flying at sub-100-foot elevations, performing high-speed manoeuvres so that their sprays reach the very edge of burn zones but they don’t crash head-on into the trees. This is an extremely dangerous occupation: 80 to 100 crashes occur every year in the U.S. alone.

In short, there are more and worse fires and we have fewer resources — and dated ones at that — with which to restore forests after them.

These are facts anyone in forest ecology and logging are familiar with, but perhaps not as well known among technologists. We do tend to stay in areas with cell coverage. But it turns out that a boost from the cloistered knowledge workers of the tech world — specifically those in the Emerald City — may be exactly what the industry and ecosystem require.

So, what’s the solution to all this? Automation, right?

Automation, especially via robotics, is proverbially suited for jobs that are “dull, dirty, and dangerous.” Restoring a forest is dirty and dangerous to be sure. But dull isn’t quite right. It turns out that the process requires far more intelligence than anyone was willing, it seems, to apply to the problem — with the exception of those planters. That’s changing.

These drones scout a burned area, mapping it down to as high as centimetre accuracy, including objects and plant species, fumigate it efficiently and autonomously, identify where trees would grow best, then deploy painstakingly designed seed-nutrient packages to those locations. It’s cheaper than people, less wasteful and dangerous than helicopters and smart enough to scale to national forests currently at risk of permanent damage. More >>
.