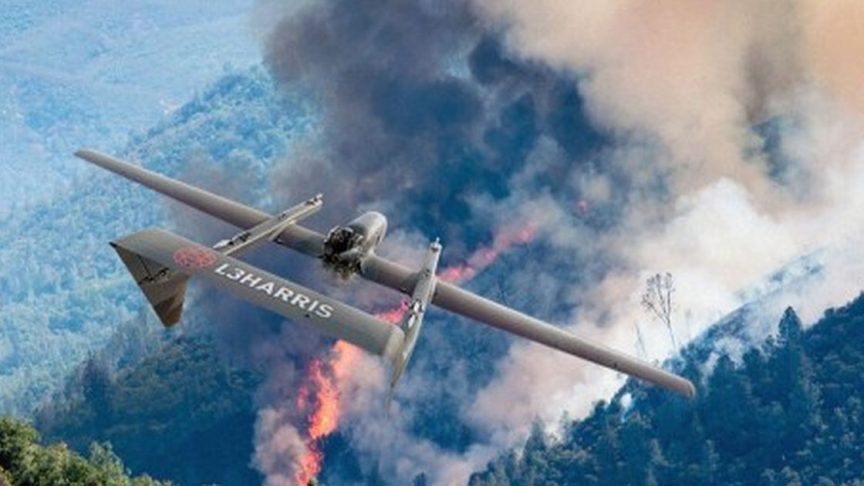 As wildfires continue to ravage vast swaths of land across the western United States unmanned aerial vehicle operators are stepping up to provide critical services, acting as eyes in the skies in support of firefighting teams on the ground.

The right tools for fighting wildfires with drones

The fixed-wing 90-pound drones’ design and technological features equip them to be deployed to battle wildfires in remote areas. The gasoline-powered aircraft are capable of taking off vertically, like rotary-powered drones. They can remain aloft for 12 hours, although on a typical mission, they are deployed for a six- to eight-hour flight. They’re outfitted with dual-camera systems, for both day and night operations.

With a wing span of 14 feet, the HQ-90 aircraft can be disassembled for easy transport to a fire scene in the bed of a pickup truck and because of their vertical take-off and landing (VTOL) capability, they don’t need a runway and can take off from virtually any open area within close proximity of the fire.

“The use of runway or landing strip is not a typical luxury that everyone gets,” in wildfire situations, Irr said. “You can launch using a small meadow or a little clearing in the trees.” Bridger has been approved under a special government interest waiver (SGI) to fly its aircraft beyond the visual line of sight (BVLOS) in wildfire situations, which has given the company the ability to deal with some of the massive wildfires sweeping the West.

The HQ-90 drones’ camera systems allow the aircraft to operate in low-visibility situations, such as in a smoke-filled sky or at night, when manned aircraft are unable to fly. “In smoky environments the infrared capability on our system allows us to see right through that smoke,” Irr said. “We have a really good advantage in those situations because we can see and the system is fully capable of operating.”

Bridger, which began as an aerial wildfire management operator using manned aircraft in 2015, began adding drones to its firefighting arsenal in the 2018 fire season. It utilized a Type 2 vehicle – a drone capable of flying for more than two but less than six hours — produced by Silent Falcon UAS Technologies to create maps that allowed firefighters to gauge the extent of a wildfire’s spread.

Last year, the company moved up the HQ-90 UAV, a Type 1 aircraft, a category which includes any aerial vehicle capable of flying for more than six hours. The longer flight time allowed Bridger to continue to perform its mapping function, while adding aerial surveillance and reconnaissance to its firefighting capabilities.

“Once we complete our mapping mission, we’ll go into a surveillance support role where we’ll fly over certain sections of the fire for a longer period of time to give them extra eyes, or infrared imagery where they need it the most,” Irr said.