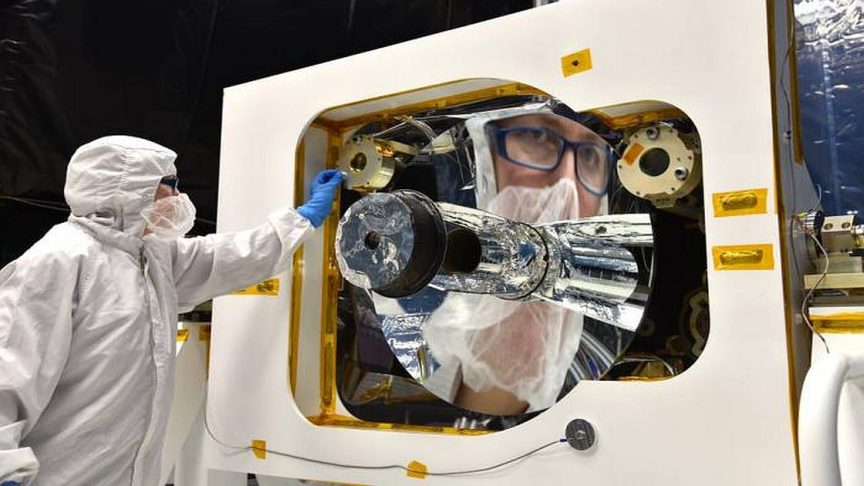 A new NASA laser instrument set to launch to the International Space Station in December will help scientists create the first three-dimensional map of the world’s temperate and tropical forests. The Global Ecosystem Dynamics Investigation, or GEDI, is scheduled to launch on SpaceX’s Falcon 9 rocket.

From the station, GEDI’s advanced laser technology will reveal the three-dimensional structure of forest ecosystems around the globe. GEDI pronounced “Jedi,” will soar over both the dark side and the light side of Earth at 17,150 miles per hour. Measurements of the height of foliage, branches, trees and shrubs below its path will yield new insights into how forests are storing or releasing carbon.

“We’d like to be able to understand what the role of forests are,” said Principal Investigator Ralph Dubayah of the University of Maryland, College Park. “We want to know how much carbon is being stored in trees because if we cut those trees down, that’s a potential source of carbon dioxide in the atmosphere.”

The GEDI mission is designed to help researchers locate those sources and stores of carbon. Scientists know how much carbon is going into the atmosphere, but are much less certain about where and in what quantities carbon is being absorbed, explained Laura Duncanson, a research assistant professor at the University of Maryland, College Park.

Earth’s oceans and forests take up atmospheric carbon, but scientists want to investigate which forests are taking in the most, or if those forests will continue to do so through time. GEDI will help unravel this mystery by providing the first highly detailed forest carbon stock map, pinpointing in fine detail where the Earth’s most carbon-rich forests are.

“To effectively manage forests toward mitigating climate change, we need to know how much carbon they store and how that’s distributed spatially, and that’s what GEDI will give us,” Duncanson said. “We can’t know how much carbon is released to the atmosphere through deforestation and forest degradation until we know how much is already there; GEDI will collect new data and fill this big, critical carbon knowledge gap.”

GEDI floods a dense canopy with laser light pulses that bounce back after making contact with an object. The end result is a comprehensive view of the density all the way down to the ground, Blair explained. The biggest challenge is having enough laser power and sensitivity to see through tropical forests, which is something GEDI does well. The instrument can work well even in the world’s densest forests, where less than 1 percent of the light that shines down makes it all the way to the ground.

In addition to forest structure, GEDI will measure patterns of different environments within tropical and temperate forests. Limited data from field plots and airborne and space-based lidar have given scientists an idea of how habitat structure varies at specific locations, but GEDI’s advanced technology will fill in the missing pieces of information around the Earth, said Scott Goetz, deputy principal investigator and professor at Northern Arizona University.

“We’ll be able to inform models of biodiversity, including patterns of species richness and specific habitat requirements of threatened and endangered species.” Goetz said. “If we’re better able to map where those habitats are using GEDI canopy structure data combined with other satellite data, it will help with the conservation of those species and forests harbouring high biodiversity.”

GEDI is slated to begin its two-year science mission aboard the station by the end of 2018. The GEDI Science Team expects to process incoming information and make it available to the public within six months of launch.

The US$94 million mission was competitively selected as a NASA Earth Venture-Instrument mission in 2014. Led by the University of Maryland in collaboration with Goddard, GEDI has the highest resolution and densest sampling of any lidar every put in orbit.

Photo: Engineer Bente Eegholm’s reflection can be seen in the primary mirror of the receiver telescope. Photo by: NASA Goddard/Desiree Stover