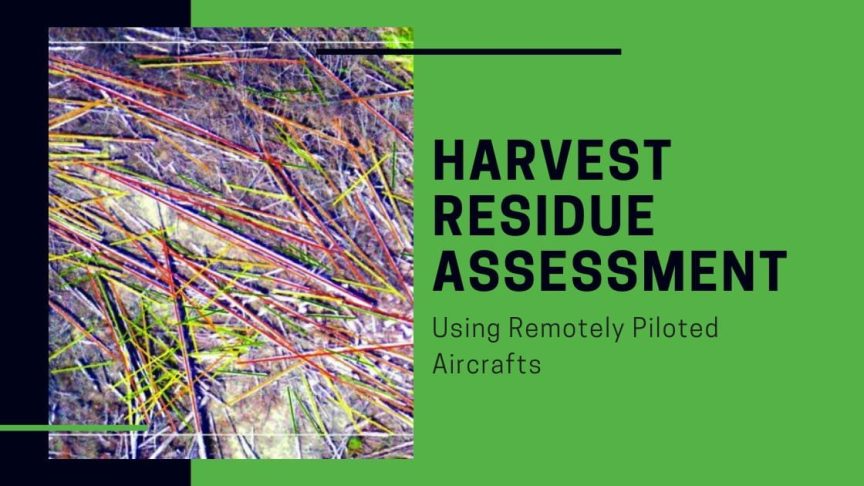 Post-harvest forest residue surveys are crucial for assessing harvest efficiency; accounting for merchantable waste, marketable fiber for secondary use, or available bioenergy biomass; compliance of ecological objectives such as coarse woody debris or understanding carbon budgets. Conventional ground methods are intensive and could be considered demanding in terms of resources and cost.

Democratization of new disruptive technologies such as remotely piloted aircraft systems (RPAS) and their growing applications has raised a lot of interest among FPInnovations’ stakeholders in reducing the intensity of cruising for logging residue assessments, while maintaining or even improving the quality of information generated.

Given the ease of deployment and comparably low-cost acquisition of very high-resolution data in small or inaccessible areas, recent experience from trials conducted by FPInnovations showed that RPAS-based imaging could be an alternative solution to conventional waste and biomass surveys, especially for dispersed residue. Furthermore, the automation of workflows inherent in RPAS increases its efficacy.

Observations from the three-year trial

In general, we noted that low-altitude RGB imagery acquired using a consumer-grade camera on an RPAS over a cut block showed good potential for extracting the cut block boundary, stratifying the area (e.g., vegetation, dispersed or piled residue, or roads), identifying individual pieces of residue that are not buried or covered, and estimating the dimensions both visually as well as through automated workflows.

Given the resolution, the minimum log size that could reasonably be expected to be identifiable is 6 cm wide, where width is the log’s diameter over bark (DOB). Validation with visually measured as well as field-measured dispersed logs/slabs showed that over 90% of the logs visible on the image were well identified, and a good match with log geometry (e.g., length and width).

While image quality and light conditions played a role, shadows did not affect identification or delineation of the logs. Identification was superior in a cut block that was newly harvested compared to the one harvested about a year prior. The distinction of log from slab was possible. However, identifying species or quality remains complex. Multi-spectral sensing could be tested in the future.

FPInnovations has demonstrated the potential in providing spatially explicit and quantifiable census on dispersed residue in a recently harvested forest cut block using simple RGB imagery acquired from an RPAS platform. In addition to facilitating a potential reduction in the field component, this may help in understanding the efficacy of the recovery process and assessing biomass potential, among other possibilities.

The trials were based on images gathered at 60 m altitude from an EO-RGB camera mounted on a Skyranger aircraft over a range of recent to a-year-old harvested secondary-growth forests in coastal and interior British Columbia.