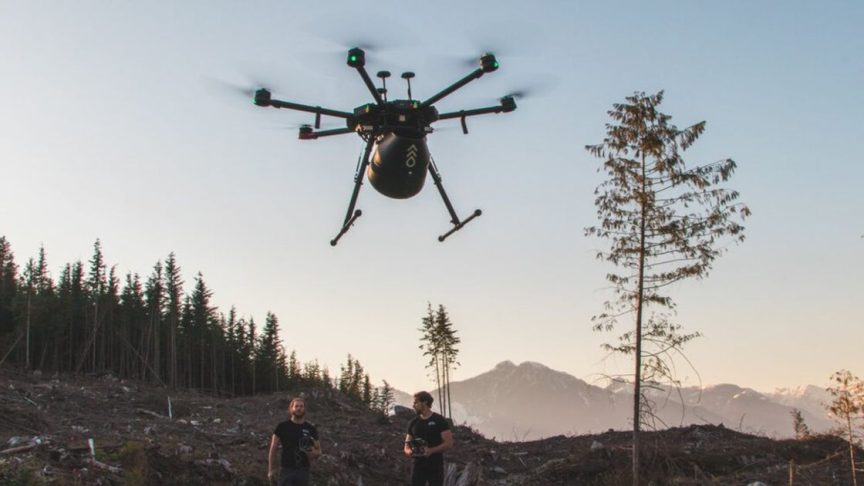 With promises to rejuvenate forests from the air, tree-planting start-ups are looking to supplement shovels and long days of labour with swarms of seed-bearing aerial drones. A growing target: B.C.’s burnt forests.

The charred remains of Douglas fir and Lodgepole pine forests once sent their seeds fluttering through the air — often in the belly or beak of a bird — but not like this. When the six rotors of these heavy-lift drones hum to life, they each propel over 1,500 seeds into an automated swarm that some hope marks the start of a revolution in tree planting.

“Reforestation is arguably the best solution we have for pulling carbon out of the air,” said Bryce Jones, co-founder and CEO of Flash Forest, a Canadian drone tree-planting company with a growing footprint in British Columbia.

“But there’s no technology. It’s literally people with bags and shovels. It’s been the same method for 100 years.” In their short history, aerial drones have transformed our skies — in some cases delivering stunning images or medicine, in others, raining terror on soldiers and civilians alike.

Now, a handful of companies are looking to re-purpose unmanned vehicles. Their goal: germinate landscapes scarred by wildfire, and in so doing, reforest a planet that by one estimate has lost half its trees. Today, a confluence of logging, blight and wildfires is largely to blame for that loss, a deadly mix that in 2021 wiped out enough forest to cover all of New Zealand.

The growing promise of planting from the sky

Aerial planting has long captured the imaginations of people trying to rejuvenate forests. Early records of aerial reforestation can be traced back to Hawaii in the 1930s, when airplanes were used in an attempt to plant trees in hard-to-reach mountainous regions of Honolulu ravaged by wildfire. By many metrics, it failed: the seeds didn’t hit the ground fast enough to take root; loose on the surface, research has found it may have even contributed to an infestation of rodents on the island.

After the Second World War, former Royal Air Force pilot Jack Walters came to the University of British Columbia to study forests. In 1953, he was the first man to put seedlings into plastic “bullets” and fire them into the ground. The seedlings struggled to send their roots through the plastic sheath, but the experiments eventually gave rise to a plug system deployed by tree planters on the ground today.

Decades later, in a paper, he floated the idea of firing the seed bullets from an airplane. Little came of it, until the late 1990s, when U.S. manufacturer Lockheed Martin Aerospace told a reporter from The Guardian it had adapted Walters’s idea. At the time, a company spokesperson said it could plant 900,000 trees per day with equipment originally designed to plant fields of landmines.