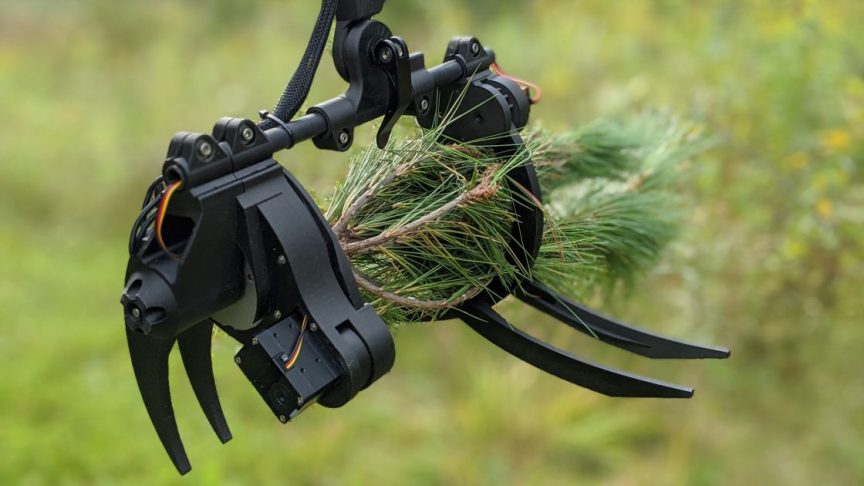 The DeLeaves canopy sampling tool was designed and developed in a research laboratory specializing in aerial robotics at the University of Sherbrooke, back in 2017. Suspended under an unmanned aerial vehicle (UAV), the sampling tool is self-powered, equipped with an HD camera, and has two robotic arms there to grab and cut foliage samples from trees.

In 2018, a first prototype was operated by a group of horticulturists from UBC Botanical Garden on a project that brought them to sample the Vietnamese tropical forest and gather international attention. Following this project, many entities in North America expressed their interest in the technology.

In the summer of 2019, the DeLeaves sampler helped the Canadian Airborne Biodiversity Observatory (CABO) reveal the spectral and functional trait differences within tree crowns; and later demonstrated its efficiency during a field trip with the National Ecological Observatory Network (NEON) to sample Douglas Fir, Silver Firs, and Western Hemlocks. Across these collaborations and numerous others, continuous improvements were made to the DeLeaves sampler that ultimately enabled its commercialization in the fall of 2020.

Since then, the tool has mostly been used to collect samples of tree canopy from deciduous and conifers, primarily in North America and Europe. Interestingly, the Canadian company of the same name also received several inquiries regarding other potential applications of their technology, such as pest management and crop sampling in agriculture.

More recently, the DeLeaves sampler was showcased and appraised by the research community when compared to other sampling techniques, and the company also added the DJI M300 series to the list of compatible UAVs for its sampling tool.

The new tool from this Canadian company will be showcased as part of this year’s ForestTECH 2021 event being run in Rotorua, New Zealand on 23-24 November and being live streamed to forest resource and tree crop managers worldwide. Further details on the eagerly awaited technology event can be found on the ForestTECH website.