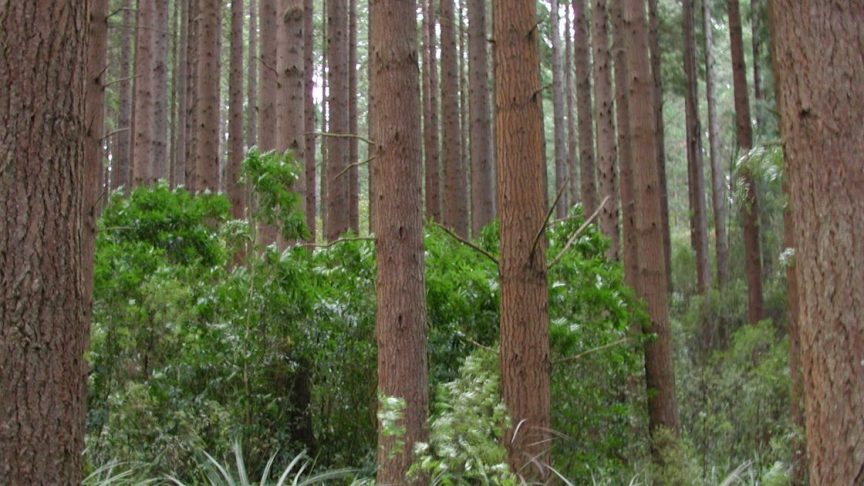 Radiata pine when it is planted too closely together grows tall and spindly while wide spacing encourages branch growth and land may be underutilised. Somewhere in between is an optimum final crop stand density that allows forest owners and growers to maximise the volume and value of the logs produced.

Optimal stand density is also affected by the decision to produce either clearwood timber, where the trees are pruned, or structural grade timber from unpruned trees. With the premium for pruned logs declining, the Scion work focussed on optimising conditions for growing valuable large-diameter, “S27”, structural saw logs with small knots. S27 logs were defined as having a small end diameter greater than 270 mm with the diameter of the largest branch being no larger than 70 mm.

Using the simulation system Forecaster, the researchers calculated the volume of S27 logs that could be grown under a standard framing silvicultural regime for various combinations of SI, I300 and stand density. Forecaster can predict growth, yield and form, including branching, for radiata pine across a range of sites and management regimes in New Zealand. Using these simulations, they were able to develop a relatively simple model of Sopt from I300, SI and rotation length.

Recognising that 614 stems/hectare is an average, site-specific recommendations can be made by taking account of local variations in productivity indices, and thus local environment, into account. Remote sensing technologies such as LiDAR, can provide forest managers with accurate prediction of local SI and I300 values and consequently more accurate predictions of Sopt.

The Sopt model suggests there is considerable scope for increasing plantation value across New Zealand through optimising stand density by site to values that are higher than those typically prescribed. Forest owners and managers can use the model to plan more targeted operations to optimise stand density and maximise the value of their crop.