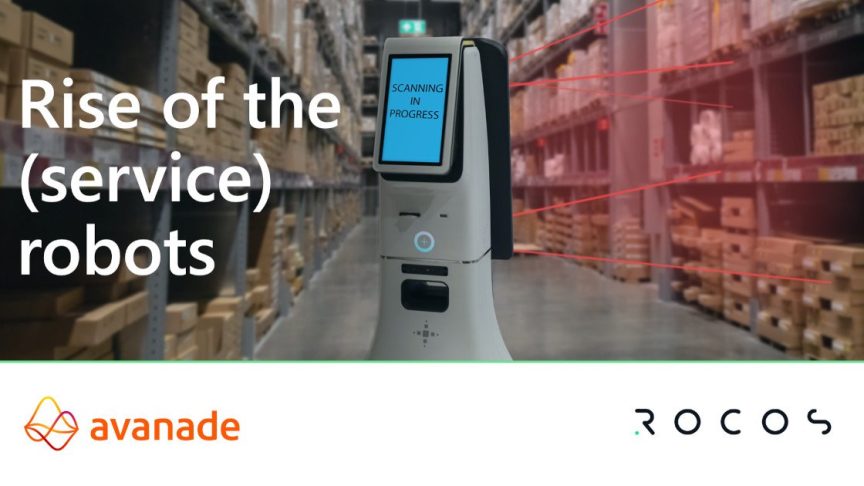 Rocos recently hosted a ‘Rise of the Service Robots’ webinar, in partnership with Avanade. Alongside our CEO David Inggs, the panel featured expert speakers from Avanade, Orlando Health and Hello Robot.

According to the experts, we’re entering an exciting new era of automation. We’re seeing the emergence of autonomous service robots in many different form factors – capable of performing jobs in a wide range of industries and enterprises.

“Today’s autonomous mobile robots come in a wide range of form factors including drones, boats, submarines, quadrupeds, rovers and even tractors. The software and hardware architecture on these robots is very different from the existing, industrial robots,” said David Inggs, CEO at Rocos.

“With this new category of robots, they’re going into environments that weren’t purpose-built for them. When you have a cleaning robot working in a shopping mall at 2am, if it gets stuck in the food court there isn’t anyone there to help. So they’re being built with high levels of autonomy – to sense and navigate obstacles in a human world, but need remote operation for intervention when needed.”

This is in contrast to previous categories of industrial robots, where service technicians tended to be on-site in case of failure. The ability of autonomous robots to do jobs in unmanned environments makes them viable to perform tasks in a much wider range of industries.

Although the technology is still nascent, various macro trends are accelerating the adoption of autonomous mobile robots in service industries.

“I thought it would be longer before we could have this conversation. But the Covid-19 pandemic has changed all that,” said Aaron Reich, Global Lead of Emerging Technology at Avanade.

“We’re seeing an acceleration in robotics and a push towards physical automation. There are lots of different use cases out there today: cleaning and sanitising hospitals, delivery of medical supplies, reaching infrastructure that’s difficult to get to or dangerous.”

Aaron Edsinger, CEO and Co-Founder at Hello Robot, explained that the convergence of new technologies is also driving change. “With the changes in AI and machine learning, robots can do things that were unimaginable five years ago.”

“Friction has gotten lower because of cloud technologies, cheap cameras and cheap sensors. At the same time, a lot of AI and machine learning technology is being commoditized in the public space. Which is great, because even as a small startup, you can download neuronet models for object detection, so your robot can recognise a sofa from a table. All of that stuff is becoming more accessible and more robust.”

How robots will work alongside humans

“Robots have gotten out of the cage in the last few years – they’re not behind a safety fence on a factory floor. They’re mobile and able to be around people,” said Aaron Edsinger. “This means we can start to have physical automation in places inhabited by people – and that’s where things get really exciting.”

Dr Julio Hajdenberg, Chairman of Medical Oncology and Hematology at Orlando Health, explained how their department has begun using ‘Betty’ – an autonomous mobile robot used to educate patients and answer basic medical questions. He said both employees and patients had responded well to their new robotic assistant.

“We try to present Betty as a member of the team, and dispel the notion of competition between humans and robots. Because it has its own persona, it’s easier for staff to see it this way.”

“We’ve done randomized studies in the hospital with patients. When we compared providing education through the robot versus a tablet, there was something about the robot persona that the patients preferred. It’s really attractive to them.”

How can enterprises begin their journey?

A lot of enterprise leaders see immense potential in autonomous robots, but have no idea where to start their journey. This is due to both the complexity of the technology and a lack of use cases. It can also be because the importance of early research is underestimated.

“A lot of enterprises don’t define the problem first – they buy a robot to see what it’s capable of, then end up having a really underwhelming experience,” said David Inggs. “That’s why the early research stage is so important. You need to clearly document the jobs that need to be done.”

“It’s also a good idea to engage a team that’s advised similar organisations, and look for external providers in the robotics space with a deep understanding of the technology. With their support, you should carry out an end-to-end proof of concept, followed by a pilot phase to work through specific problems.”

David Inggs said that because the technology is so new, it’s often not clear what level of autonomy can be reached until these proof of concept and pilot stages are completed. But at the same time, enterprises can’t afford to wait.

“If you’re not adopting physical automation now, your organisation will face serious competitive threats from those who moved first in the coming years.”

Watch the webinar to learn more.