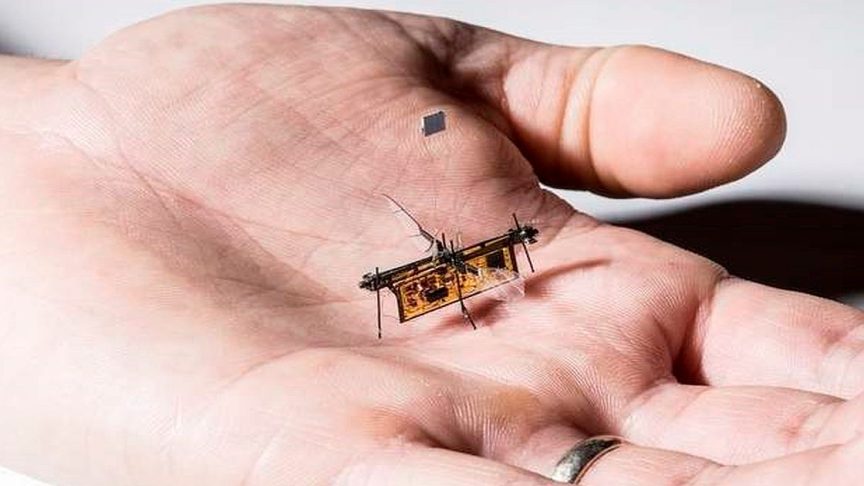 This is one flying insect you don’t want to swat. It doesn’t bite, sting, or spread disease and someday it could be a life and climate saver. In time, it could survey crops, detect wildfires, poke around in disaster rubble searching for survivors and sniff out gas leaks, especially global warming-fueling methane, a powerful greenhouse gas many times more potent than carbon dioxide.

Introducing…RoboFly! It’s the first robotic flying insect that lifts off without being tethered to a power source on the ground, weighs just a bit more than a toothpick, and takes off using tiny beating wings (not propellers, as more drones do) driven by a laser beam. A minuscule on-board circuit turns the laser energy into electricity, which causes its wings to flap.

Right now, RoboFly can only take off and land – but cutting the cord is just the beginning.

“Before now, the concept of wireless insect-sized flying robots was science fiction,” says Sawyer Fuller, assistant professor in the University of Washington’s department of mechanical engineering and one of its creators. “Our new wireless RoboFly shows they’re much closer to real life.”

The researchers presented their findings at the recent International Conference on Robotics and Automation in Brisbane. Ultimately, the scientists believe their invention will have the ability to hover, perch on things, and fly around by steering the laser, or possibly by adding tiny batteries or culling energy from radio frequency signals. The goal is to direct it into performing specific tasks, such as surveying crop growth and detecting gas leaks. They even think it might be possible to equip them with smoke detectors so they can find forest fires more rapidly than larger robots. More >>.