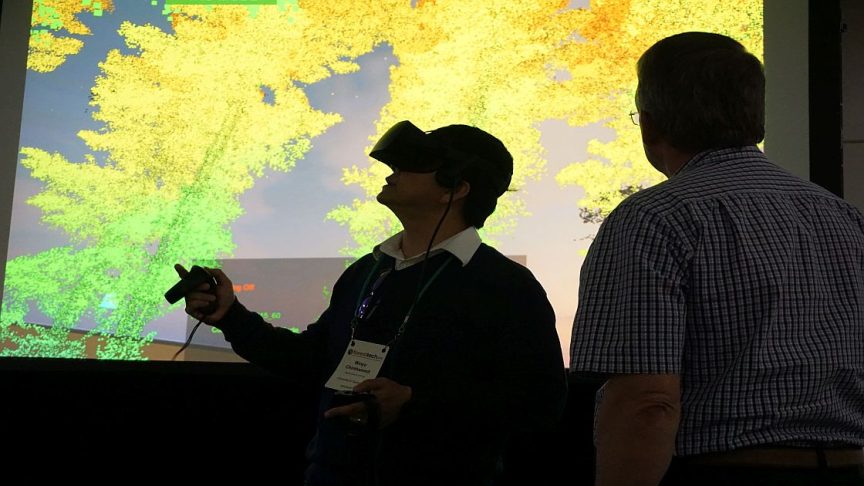 As part of this FWPA-supported research project, a team at the University of Tasmania used data acquired by helicopters and unmanned aerial vehicles (UAVs) to investigate the potential of VR to replace current forest inventory fieldwork approaches.

Lead researcher Dr Winyu Chinthammit, of the University of Tasmania’s College of Sciences and Engineering, said the project was prompted by the fact forests are becoming more difficult to evaluate manually, due to increasing safety concerns and access problems.

“We were looking to work with people who didn’t have any experience of VR, but who would traditionally go into forests to assess trees, in order to test how people who already have skills in forestry might perform inside a VR environment,” Dr Chinthammit said.

The design of the VR application was further informed and developed using the results of extensive user testing and feedback, undertaken in collaboration with several industry partners.

The testing found all participants demonstrated a capacity to work within the VR environment. Most were able to successfully acquire the skills needed to use the tools and take basic measurements, including diameter and height, within a reasonable time.

However, more complex measurements relating to features such as wobble, sweep type, stem damage and branch size inside the canopy were not as accurate. “This project provided evidence that a field crew can indeed operate inside a VR environment and perform some of the same basic tasks they would normally complete as part of their everyday operations on the ground,” Dr Chinthammit said.

“Going forward, we plan to use more advanced visualisation and rendering techniques to determine how the data can be used to give a more detailed view of what is going on inside the canopy”.

“The ultimate aim is for users to assess forests in a VR environment with the same levels of accuracy that would be achieved had they gone into the forest themselves. For industry, this will mean reduced labour costs, as well as overcoming access problems and safety issues,” Dr Chinthammit said.

Progress on using VR for forest inventories has been a key component of the last two ForestTECH technology events run for Australasian forest resource managers and inventory foresters. For ForestTECH 2019 which runs in November 2019, results from operational assessments in several forests across Australia using VR will be detailed. Registrations to the ForestTECH 2019 series that runs in Melbourne, Australia on 13-14 November and again in Rotorua, New Zealand on 19-20 November are now on line. Further details can be on the event website.