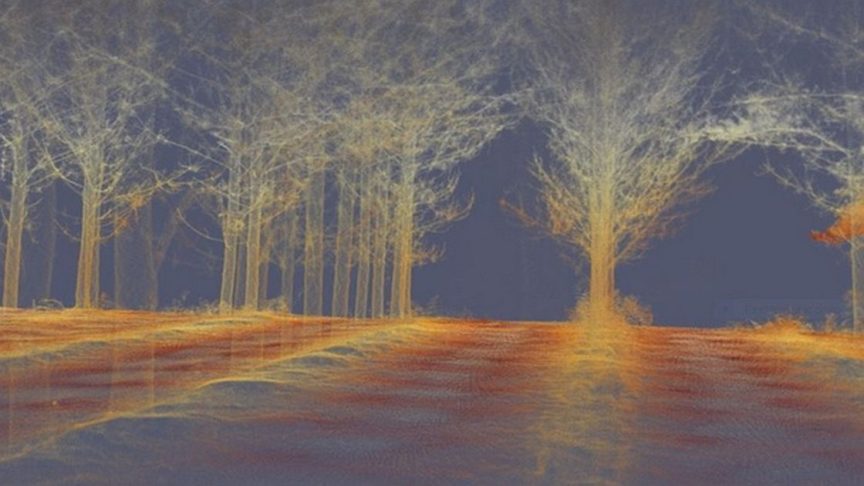 An unmanned aerial vehicle made what is believed to be the world’s first autonomous flight under a forest canopy in Rotorua, New Zealand in late November 2019.

Remote sensing scientists from Scion have been working with Emesent, a company who specialises in designing automated systems to collect spatial data in challenging environments, to test out the Hovermap navigation system in a mature stand of Pinus radiata on the Scion campus in Rotorua. The team flew an autonomous UAV fitted with a Hovermap system using simultaneous localisation and mapping (SLAM) around tree trunks and through branches to create a coherent 3D point cloud from a laser scanner in an environment with no GPS signal. This is believed to be a world first.

The Hovermap system builds a 3D map of the forest around it within a 60+ m radius then uses that to operate safely in this complex environment. In a fully autonomous mode, the system uses algorithms to consider the 3D environment map and navigate the UAV to an operator-defined waypoint. The craft may encounter navigational hazards or dead ends, and the on-board Hovermap software has to use this continuously updated internal map to recalculate its route and navigate through a new path to reach the target. This system, therefore, permits the craft to sense new obstacles that may appear in the environment as it is scanning and flying.

The system is mountable on the DJI Matrice 200 and 600 range of craft and fully integrates with their flight control system as an object avoidance system. It can also take the GPS feed from the craft itself, allowing for geolocation of the point clouds when operating above the canopy.

Sub-canopy data capture has been a hot topic in the forestry world for a number of years. A combination of technological developments is now making it faster, safer and more detailed.

Miniaturised, high accuracy aerial laser scanning (Lidar) systems specifically designed for UAV operation, provide an accurate representation of ground and tree canopy by flying above the trees. However, not enough data on the stem of the tree, the area that holds the most value, is being detected with this solution.

The development of simultaneous location and mapping (SLAM) systems has made it possible to collect Lidar data in the GPS-denied under canopy environment and characterise stem features. Scion scientists have been exploring the possibilities of this for a number of years using the ZEB 1 handheld SLAM laser scanning system from GeoSLAM. More recently, Scion has been looking at new devices using SLAM methods and similar laser scanner technology.

The Hovermap unit in use captured an impressive amount of detail on the lower part of the stem when hand-held or carried in a backpack, and it can also be mounted to a UAV and used to navigate the craft under the canopy while collecting data.

A safe, efficient and effective way to gather under canopy data is the last piece in the puzzle of representing a forest digitally and creating a complete picture of the forest from above and below that identifies and characterises individual trees by their location, size, straightness and branching.

Forest owners and managers can use this data to calculate the volume of wood of various grades within a forest (and hence its value) then use this knowledge to guide harvesting and marketing decisions. Being able to direct logs to the appropriate processor for certain uses is an effective way of instantly increasing the value of a forest.

An up-to-date picture of a forest can also help with management decisions such as planning tree thinning operations, targeted applications of fertilisers and monitoring forest health, as examples.

Exceptional individual trees for inclusion in tree improvement programmes can also be identified, and research trials can be measured and monitored accurately, resulting in better trees in tomorrow’s forests.

Autonomous flying will also speed up the data gathering process and make it safer. Areas that have been previously completely unreachable, both above and below the canopy, will also be able to be surveyed. The Hovermap-enabled craft will also be able to carry additional sensors, providing more data than ever.

This work has concentrated on data-gathering in a plantation forest but the technology is equally usable in native and urban amenity forests, for example. Forest health, predator damage and control, storm damage etc could all be monitored to keep all forests growing strongly.

Watch the UAV in action

Emesent (www.emesent.io) is a spin-out from CSIRO’s Data61. It specialises in robotics, AI, drone autonomy, mapping, and data analytics and is leading the way in automating the collection and analysis of data in challenging environments.

The Hovermap sensor was originally developed for use in underground mines where there is no GPS signal, and the environment is confined, dark and hostile.

Scion (www.scionresearch.com) is a New Zealand Government research institute that specialises in research, science and technology development for the forestry, wood product, wood-derived materials, and other biomaterial sectors.