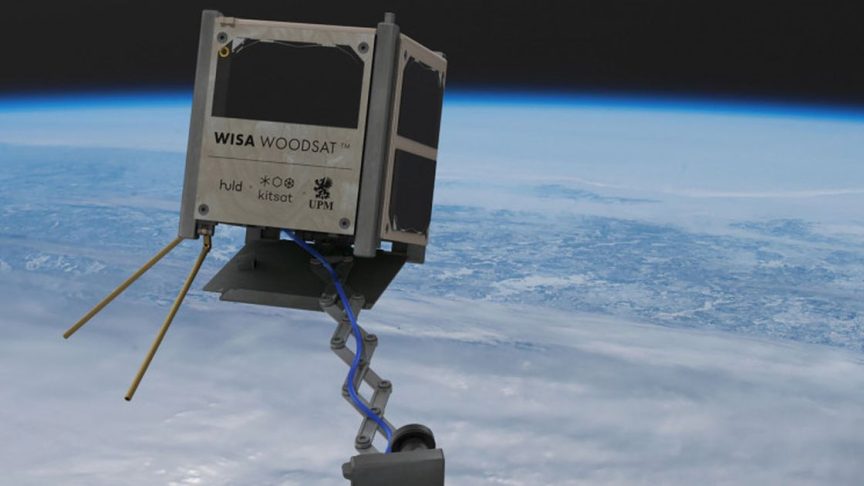 When we think of old tech in space, we think of the retrofuturism of old sci-fi movies like Star Wars and Alien — their huge 8-bit computers and monochrome screens presented at the time as the height of technology.

Seemingly taking one step further back on the technological evolutionary timeline, a project called WISA WOODSAT is sending a small satellite up into space with an outer shell made out of plywood. We covered the planned intention for this project in February. Plans are still on track apparently.

“Our goal is to put the first-ever wooden satellite on Earth’s orbit by the end of 2021,” the WISA WOODSAT team tweeted on Monday, April 12. The Finland-based project, sponsored by plywood manufacturer WISA, might be seen by some as little more than an advertising ploy, however, it will ensure that a student project gets sent up to space — so what’s not to like?

As a report by Ars Technica explains, the project uses the small CubeSat format called Kitsat, a 10cm/side cube that was specifically designed for educational use. CubeSats are tiny satellites that can be adapted for a huge range of functions. In 2019, for example, the Planet Society’s Carl Sagan-inspired LightSail project showed that the small lightweight satellites could be propelled using a sail powered solely by photons from the sun.

In WISA WOODSAT’s case, the CubeSat in question is very much part of a scientific experiment led by students, with different parts of the CubeSat built by students from around Finland.

The student’s satellite model, which was originally sent to space on a balloon, has now received an upgrade and will reach space aboard a Rocket Lab launch vehicle thanks to sponsorship from plywood supplier WISA.

As WISA is sponsoring the launch, the satellite will include an outer layer of plywood. The versatile wood material won’t serve much of a purpose in space — though it technically will allow the launch to take place via the very unscientific reaction of money equals rocket fuel.

As for the student project itself, the WISA WOODSAT team will use a communication technology that allows a simple, low-power receiver to pick up the WOODSAT’s signal, which will then be broadcast over a radio frequency dedicated to amateur radio.

Though there is currently no date scheduled for the launch of the wooden satellite, it is set to ride into a polar orbit via a Rocket Lab launch vehicle at some point this year.